710 considers the timeline, the geography, and the politics of the 710 interstate freeway and its incomplete five-mile northern extension — an invisible line that marks the longest running development dispute in American history. Covering 23 miles and over 60 years of local, state, and federal planning, the exhibition looks at our ever-changing relationship to the freeways and the matrix of transportation, industry, environment, and neighborhood power that it has come to represent.

For many residents of the San Gabriel Valley, the 710 is the freeway that will never be built. The five mile gap between Valley Boulevard in the south and West California Boulevard in the north marks the battle lines of an intergenerational conflict over the very meaning of “development”. For the California Department of Transportation, the 710 is the freeway that is always about to be completed. One more feasibility study, one more environmental impact report, one more funding cycle or election away… always just on the horizon of final connection, of “closing the gap”. In 2018, with the overland freeway proposal dead and the tunnel alternative currently de-funded, we look back on a struggle that has spanned the entire freeway era in America, from modernist ideal to paleotechnic dinosaur.

The materials in the exhibition have been sourced from previous tenants, neighbors, and local activists involved in the No 710 Committee, as well as the California Department of Transportation, and regional libraries. New materials have been sourced or fabricated by Before Present, and new work has been commissioned from LA historian, Norman Klein. Before Present is currently located in a house originally slated for demolition along the proposed route of the 710 extension. 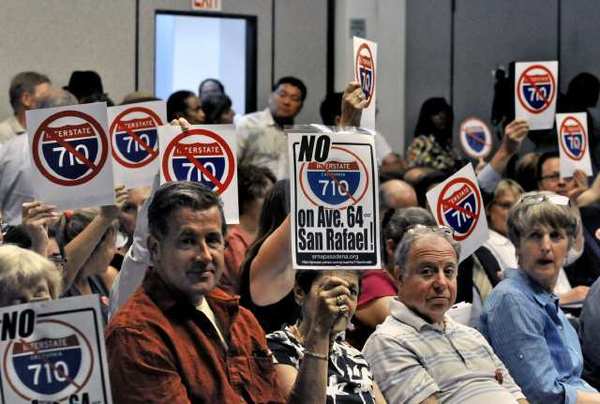 Julia Paskin, "Most Failed Transit Projects Don't Have An Exhibit, But The 710 Freeway Extension Does" in Laist, July 16, 2018.